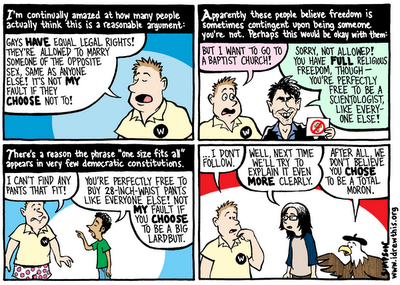 In addition, you should check this christian video game out. Story on it here and the Left Behind Games' website here. The news report on the Left Behind website asks "Is violence in the name of god any better than just plain violence?". Uhmm...I'm going to jump in on this and say holy shit no, it's much, much worse.

And as a reminder, for those of you that get MoveOn.org emails, go vote in the poll to determine the organization's focus for 2006. You can vote until Wednesday at midnight. I'll have a post about the outcome on Thursday.
Posted by Delta at 8:56 PM 3 comments:

Book Review: A People's History of the United States by Howard Zinn

The philosopher George Santayana once wrote "Those who cannot remember the past are condemned to repeat it". Implicit in this statement is that knowledge of history can help us better understand the present and assist us in making good decisions. But as I think of my history education growing up, especially those classes before college, I don't see any aspects of that education which would help me better understand the world today. Let's see, if I become a fascist German dictator I won't attack Russia (at least not in the winter). I also guess I won't settle political arguments with a duel. And if I'm ever a Native American I sure as hell ain't going to trust Whitey. Yes, this information is definitely going to be useful to me.

Traditional history education leaves one completely unprepared as to how to put into context the political situation in the country today. Reading traditional history gives the impression of a country unified with people of common interests. Internal conflict in minimized or ignored altogether, while conflict with foreigners is given emphasis, helping to instill in American youth a sense of deep patriotism and suspicion of others who happened to be born on dirt that fell inside a different countries invisible borders. Today's conflicts in politics, in war, and in economics seem to be unique if traditional history is all we know. Yet there is much in history that sheds a great deal of light onto these subjects and then one can see the truth behind Santayana's statment. 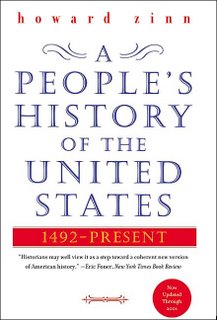 I finished this fairly long book (700 pages) about 30 minutes ago and I really enjoyed it. I also learned a lot. It starts from the landing of Columbus in 1492 and goes up until the invasion of Afghanistan. I was horrified at exactly how unbelievably cruel the Native Americans were treated. This treatment they faced is many orders of magnitude worse than the impression that I had from high school. I also found it interesting to read about all the class conflict between workers and employers and how often and how unified workers were in their strikes, often during times when the rest of the country was suffering from extreme racism. And it angered me each time as the police, national guard, or army would come in on the side of the owners and break up the strikes, many times shooting workers or forcing them to work against their will. I found it extremely interesting to know how widespread socialism and socialist thought was in the United States, especially before the Espionage Act during WWI landed many prominent socialists in jail for free speech "violations" and of course before the McCarthyism of the 1950s made it illegal to not love capitalism. I learned a lot of details about Vietnam that I hadn't heard before and was glad to have a better understanding of this major part of American history.

As I read this book I noticed time and again history repeating itself in ways that are helpful to understand today. From the government lying or omitting important information to bring the country to war to the way that the government sets up "investigations" of itself in order to make the public think that it's reforming after some scandal when in actuality the system isn't changing at all, I saw trends that went throughout history and continue in the most blatant way today. Instead of the usual "Paul Revere liked to ride horsies" historical trivia, the book actually contains the type of lessons that increase one's understanding of today's world.

I highly recommend this book. You can buy it here

. And also, on an unrelated note, I just finished up a very busy few weeks and so posts should be more frequent. Thanks for your patience!
Posted by Delta at 7:37 PM 6 comments:

I've been really busy lately and haven't been reading any of the emails that MoveOn.org has been sending me. But today I looked at one and got a little educated on this Net Neutrality issue. Here's a brief explanation from the FAQ at Save the Internet.

What is this about?>

This is about Internet freedom. "Network Neutrality" -- the First Amendment of the Internet -- ensures that the public can view the smallest blog just as easily as the largest corporate Web site by preventing Internet companies like AT&T from rigging the playing field for only the highest-paying sites.

But Internet providers like AT&T, Verizon and Comcast are spending millions of dollars lobbying Congress to gut Net Neutrality. If Congress doesn't take action now to implement meaningful network neutrality provisions, the future of the Internet is at risk.

What is network neutrality?

Network Neutrality — or "Net Neutrality" for short — is the guiding principle that preserves the free and open Internet.

Net Neutrality ensures that all users can access the content or run the applications and devices of their choice. With Net Neutrality, the network's only job is to move data — not choose which data to privilege with higher quality service.

Who wants to get rid of Net Neutrality?

The nation's largest telephone and cable companies — including AT&T, Verizon, Comcast and Time Warner — want to be Internet gatekeepers, deciding which Web sites go fast or slow and which won't load at all.

They want to tax content providers to guarantee speedy delivery of their data. They want to discriminate in favor of their own search engines, Internet phone services, and streaming video — while slowing down or blocking their competitors.

These companies have a new vision for the Internet. Instead of an even playing field, they want to reserve express lanes for their own content and services — or those from big corporations that can afford the steep tolls — and leave the rest of us on a winding dirt road.

Also, there's 5 videos here, including an explanation from a ninja, a Halo character, and more. I had no idea what the ninja was talking about. The last few videos are probably the best in terms of information.

I think this is a very dangerous situation. An absolutely free internet is crucial for all that is rational, fair, and democratic. It is the only means by which people can communicate to large numbers of other people and avoid the mainstream media which spouts nothing but propaganda. If we lose the internet, we lose our voice, and with it, our hope.

So get involved. Or at least educated yourself. Without knowing what it's about, you might fall victim to a video like this which gives a very inaccurate representation of the situation.

Update Actually, the ninja makes a very compelling argument. I recommend that one.
Posted by Delta at 12:19 AM 7 comments: