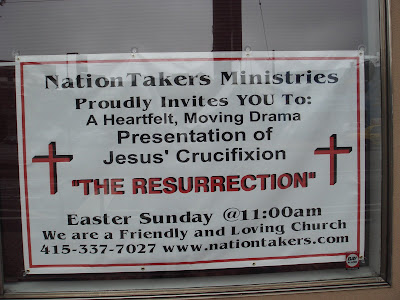 In the atheist community nowadays we hear a lot of chatter about the threat of theocracy rearing its head in America. While I agree that religious believers who shun reason and prefer to live a life of magical superstition, continuously feel persecuted even while on the offensive, and believe that all social problems can be solved if we "get right with God" are a huge threat to our so-called democracy, I think that there is essentially zero probability that a theocracy will rule the US in the near future. The reason for this belief is that I'm assuming that for a political system to be truly a theocracy, the rulers of the economic and political life belong to religious institutions or are at least strongly controlled by those who are. But I can't see this happening in America. The movement that the Christian Right represents is not anti-capitalist, and this is what they would have to be in order to displace the current rulers of our society. Furthermore, because religion is basically a tool to prevent those from thinking and from taking independent action, it necessarily creates a movement of followers, not leaders. This places all decision making at the top, and the leaders of any organization (whether they be religious, hierarchical worker unions, or even "revolutionary" parties) have been shown to be very susceptible to being assimilated into the thinking and behavior of the ruling class. While other movements can have some hope in the initiative of the rank-and-file members, religious movements have little chance of this happening due to their extreme hierarchical structure, the silencing of dissent, and the deification of their leaders.

Having said that, the Christian Right does pose a threat, but it's in the form of bringing about fascism, rather than theocracy. Christians will not establish a new order, but will simply lend support to the existing order and help dismantle social programs and liberties that have taken us a long time to achieve. This has been religion's role for centuries, whether its supporting the rule of kings, dictators, or capitalists.

But to the book. American Fascists

is a book by Chris Hedges which holds as one of its claims on the cover that it will argue the similarities between the Christian Right and young fascist movements that developed in Italy and in Germany at the beginning of the 20th century. If this is what you're interested in (as I was), do not read this book. Hedges barely even mentions Italian fascism and National Socialism in his book, a far cry from the detailed analysis and comparison I was looking forward to. I even read a book by Daniel Guerin called Fascism and Big Business before reading American Fascists in hope of learning more about the young fascist movements in Europe so that I could better evaluate Hedges' arguments. Guerin's book, written in the eventful 1930s, is a very detailed look at the buildup of fascist movements, what institutions supported them, and how they were able to appeal to the masses. Reading Hedges' book you wouldn't be convinced that he is even aware of all the characteristics of the Italian and German fascists as he routinely misses opportunities to make comparisons that would have been of great interest to the reader and would have made his case more solid.

The book is written in that very personal style, as if he's simply writing in his diary as he travels the country and attends various christian political events and sermons. Some people may like this style of writing because it resembles a novel, but for an analysis I think it's completely inappropriate. It tends to focus on individual figures and their actions rather than analyze the entire movement from a distance. Here, I just flipped open the book to a random page, and here's what I read:

The opening session is held on the third floor, a large room with a round stage surrounded on three sides with rows of folding chairs. The hall is dimly lit. There are a few thousand people. Large television screens are suspended from the ceilings, and the platform in front of us has a podium and a grand piano.....

So in conclusion, I didn't enjoy this book very much. To me it seemed like a more or less unstructured rant against those who are "hijacking" the otherwise good Christian religion. However this book may reach out to moderate and left-wing Christians (Hedges actually went to Harvard Divinity School) and so I'm glad it's out there. But if you want to learn about fascism and how movements develop then you should look somewhere else.


† The picture at the top is one that I took about two months ago in San Francisco after coming back from the march against the Iraq war. Their website is about what you would expect from a group called "Nation Takers".


On an unrelated note, I recently decided to make an anarchist shirt on CafePress. What do I hope to come from it? Well, anarchism is basically the political equivalent of atheism in America, and as many atheists seek to convince believers that atheists don't worship the devil, I feel somewhat compelled to try to convince those around me that anarchism does not mean "chaos", but that, as the symbol represents, "anarchy is order". I have also included some text on the back of the shirt which says

Anarchism, simply put, is the radical notion that freedom and democracy are not merely words, but that they represent actual social conditions that we should strive to implement


While it's not the best definition in terms of rigor, I think it at least gets across the idea that 1). Anarchism is a legitimate political philosophy, and is not simply a way for teenagers to get back at their parents for making them take out the trash and 2). That anarchism is associated with democracy, not with disorder. One of the primary goals of anarchism is the creation of an actual, direct democracy, and I hope to introduce that idea into the heads of those who see me wear this shirt. Pictures of the design are below, and if you'd like to see the design on other items, go check out my site. 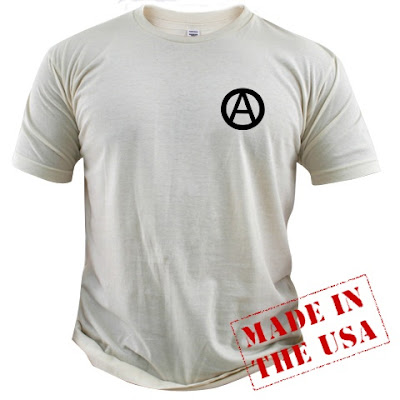 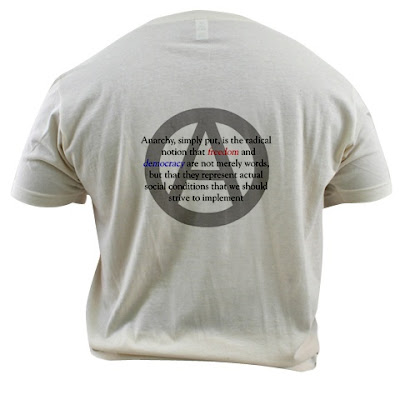