The United States government has the largest military budget in the world, and amounts to roughly 50% of all military spending worldwide. In 2006 the US military budget was $441 billion. It is worth noting that this does not include spending on the war on Iraq or Afghanistan, nor does it represent nuclear weapons research (part of the US Dept. of Energy budget). The following graph gives a nice summary of how US military spending compares to other countries, including its military "rivals" and members of the "Axis of Evil" (none of these grave threats made the list). 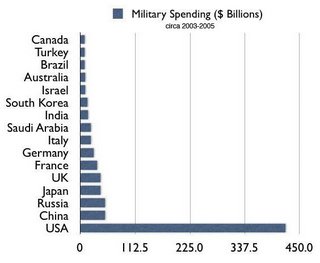 With the US national debt becoming more and more out of control and with lack of funding for education and other social services, responsible citizens should ask themselves whether all this military spending is justified or not. Is it really necessary for us to be able to win a war against the rest of the world, or would it be preferable if our leaders felt a little more compelled to resolve conflicts without resorting to the threat or use of force? Those in favor of this amount of spending might argue that we need a large military because we have taken on the honorable duty of protecting freedom, peace, and democracy around the world. Even without looking at history (which outright refutes this), it seems doubtful that the US government would spend its own money on safeguarding the well-being of foreigners when it doesn't even have the desire to provide health care to its citizens like almost every other country in the first world.

We're certainly seeing the problems associated with the military-industrial complex that President Eisenhower warned against back in 1961. Reducing the federal military budget by just a small amount could mean a huge boost to other social programs, such as education which comes in at only $88 billion.

On the other hand, let's for the sake of argument say that the US spending on defense is justified. Then we must ask ourselves whether we are getting the most bang for our buck. And I think we certainly are not. In 1997 the United Nations Human Development Report stated that the approximate cost of providing basic education, basic health and nutrition, reproductive health and family planning, water, and santitation for ALL in developing countries would only cost $40 billion/year for 10 years. Additionally, for an extra $40 billion/year, poverty could be eradicated completely. Imagine how popular the United States would be if we were to fund this! And this can be done all while maintaining a ridiculously high military budget in comparision to other countries. If the US really wanted to win the war against terrorism, then this would be a simple and sure way to do it. Terrorist organizations wouldn't be able to recruit if the US was seen as being so generous and benevolent towards others.

Unfortunately, I do not think this has a chance in hell of happening anytime soon. The reason that it won't happen is that the ruling interests in the country do not care about national security, nor do they care about peace in other countries. Military spending is a handout to the military contractors and as a tool to further US imperialistic interests abroad. If only Lockheed Martin made bread....

But probably the biggest reason against rising the standard of living in other countries would be the horrible hit on corporate profits. If you had access to food, water, education, and health care for you and your family, would you go to work in a factory for $1/day? Absolutely not. Only someone who is faced with the threat of death would consider throwing away their short life in this way.

I think this issue shows how important it is for American citizens to exert control on the government. The US is by far the most wealthy country in the world, and if allowed to, that wealth could transform the world into a much, much better place.
Posted by Delta at 2:57 PM

"...if allowed to, that wealth could transform the world into a much, much better place."

But that would mean giving up the grand dream of pissing billions down a rathole so that we can send a man to Mars and plant one of George W's eye boogers there.

I wonder too if the "free" world cut the production of bullets, how would that affect world politics?

Defense contracts are Welfare for the rich... and they have the audacity to say "John Maynard Keynes is dead".

I always assumed everyone would want peace, to the point where they were willing to work hard for it. (How hard is it NOT to kill someone?) I was horrified to learn that people really don't want peace. Some people are violent and greedy and proud of it.

If we are to depend on rugged individuals who fully comprehend the consequences of their (violent?) actions, that means that each person must be responsible for not harming others. If that is the only way to achieve peace without violent coercion, I'll do my part.

If some of that money actually went towards building giant fighting robots, then we could claim some sort of justification, methinks.

It's always easier to blow shit up than build a house. And it's certainly more fun. Yet, it's not good for us in the long run. The same goes for logging, polluting and other such activities. We're blowing up the house - or more specifically, the apartment we've rented for the past few million years - along with all the other tenets.

As the old cliche goes: The opposite of war isn't peace. It's creation.

It would be nice if people in power would actually care about what us, lowly citizens, think... but it's not the picture we are seeing. They channel billions of OUR money into THEIR military contracts while we, here on the ground, are trying to figure out how to pay for education, healthcare or food.

Ahh... America... the most paranoid country on Earth.

Hey delta, not sure if you remember me, but I'm Prophetic_Farmer, and I wrote the Boxer the Brown Horse blog. We had some great dialogue, and unfortunately I didn't continue posting on that blog and consequently forgot the password, heh, woops. But, I've started a new blog - mainly in response to the very recent nuclear test by N. Korea. The blog is disappointingly underdeveloped at this point, but soon I hope to have it up and running stronger than Boxer the Brown Horse. I look forward to hearing from you on my future posts! My new blog can be found at http://www.painfulprocess.blogspot.com

Could you publish the origin of this graph? I didn't notice it in the text above.

Thanks for the comments everyone. I feel very fortunate to have you all to discuss ideas and events with. Your comments help me refine my ideas and introduce me to new ones.

I've been fairly busy, both with work and with reading my book on the Spanish Civil War. I've got one good day's worth of reading left until I'm done, and I'm looking forward to writing a series of posts about different aspects of it.

I certainly do remember you, and it's nice to see you blogging again. I'll see you at your blog =)

This graph came from a forum I post in that requires a password, but I found it again at wikipedia here.

This appears to be the original source.

Here is another aspect of "defense policy" is the possible construction of prison camps for alien suspects, but also for American civilians.

An example of possibly one such project for a FEMA prison camp.

Interesting video bernarda. I'll keep an eye out for any other evidence that would help support that claim.

But regardless of whether camps are being built on US soil, the mere existence of them just a bit off the coast of Florida is scary enough. It doesn't take any effort to move people there and once you're deemed a terrorist, you no longer have much of a right to defend that claim.