Voices of a People's History of the United States

For Voices, Zinn and Arnove have selected testimonies to living history-speeches, letters, poems, songs-left by the people who make history happen, but who usually are underrepresented or misrepresented in history books: women, Native Americans, workers, blacks and Latinos. Zinn has written short introductions to the texts, which themselves range in length from letters or poems of less than a page to entire speeches and essays that run several pages and longer. Voices of a People's History is a symphony of our nation's original voices, rich in ideas and actions, an embodiment of the power of civil disobedience and dissent, wherein lies our nation's true spirit of defiance and resilience

The excerpts were read by a large collection of very good speakers, including Alice Walker, Steve Earle, Mos Def, Melanie Demore, Aya de Leon, Nora el Samahy, Luis Valdez, John Trudell, Anthony Arnove (the book's co-author), and Howard Zinn himself. Despite there being a couple thousand people there, I got a very close seat. Below is a picture I snapped of Zinn towards the end. 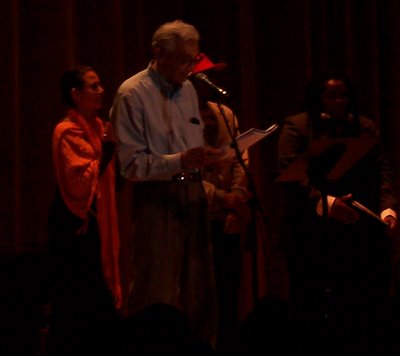 I didn't even know that this was going to happen until lunchtime today, when I was fortunate enough to have to go to the restroom and there discovered this event being discussed in the paper. I'm glad I found out. It was by far the best live event I've ever been to. Two hours straight of extremely powerful and moving material. I believe my favorite part was a reading of an editorial from the abolitionist newspaper North Star called "The War With Mexico". I wish I had the full excerpt, but I'll have to deal with the only part I could find online.

We have no preference for parties, regarding this slaveholding crusade [here he refers to the Mexican-American war (1848)]. The one is as bad as the other. The friends of peace have nothing to hope from either. The Democrats claim the credit of commencing, and the Whigs monopolize the glory of voting supplies and carrying on the war; branding the war as dishonorably commenced, yet boldly persisting in pressing it on

This is the tail end of what was said. But by the end of the bolded part, the entire audience saw that that was exactly the situation we faced today and broke out into applause. If they didn't understand it before, then after this the entire audience must have finally understood why historians say that history repeats itself. It was truly an awesome moment, and similar moments occured throughout the rest of the night as events from the past were almost identical to those today except for changes in names.

Everyone's readings were great though. Mos Def was absolutely fantastic as Malcolm X! Probably the best part of the night was a contribution from the Vanguard Public Foundation (not in anyway related to the trading company) which paid for 500 high school students to come to the event. The event must have made a large impact on many of them that will shape their outlook on the world for the rest of their life.

If anyone has the chance to go to this sometime, you really should. I also plan on buying the book. I won't be able to read it for awhile, but it looks like it will be a great reference for my personal library.
Posted by Delta at 12:00 AM

Other books you should put at the top of your reading list:

"The People's History of the American Revolution" by Ray Raphael

You will also find many other books by Terkel, including some audio books and interviews.

A People's History is terrific. It skewers a lot of the popular myths we all grew up with.

For instance, Zinn takes a hard look at the "Helen Keller Myth" and fills in some of the gaps, such as Keller's socialist involvement (she was a Wobbly) and her conviction that it's not true that "anyone can do anything." She stated openly that her family's prosperity was a major force enabling her to get a good education and take advantage of many other opportunities in her life.

Another good one is James W. Loewen's Lies My Teacher Told Me, a scathing look at the sorry state of high-school history texts and history "education." Also check out his Lies Across America for a rundown of the misinformation presented by many historical sites.