Fox News Sets Up Enemy In Order to Rally Its Base

Some of you may watch Fox News, but I hope you do it only for comedy. I generally check out their website on a daily basis and find out what they're up to, although it usually just makes me upset. But hey, anger inspires action sometimes. Lately Fox News has done a ton of segments about a supposed "War on Christmas". This war isn't just about making the holiday more secular, but they actually claim that secular progressives want to eliminate Santa and the like. The situation actually reminds me of UTI's What It Feels Like to be an Atheist article in the sense that we actually have people that are arguing viciously for other people to acknowledge and welcome Santa in their holiday season. Fox News' anchor Gibson has even wrote a book on the supposed war, and he comments on it practically everyday on his Fox News segment. He was recently invited to talk to O'Reilly so that they could mislead the public together. Here's the video, courtesy of Media Matters. O'Reilly made a list of the retailers that were using Merry Christmas as their greeting as opposed to those who simply use Happy Holidays in an attempt to scare these companies into saying the christian phrase. I have to admit that it's a good way to try to distract the people from a real war where men, women, and children are dying by inventing another war where the biggest atrocity is someone not saying 'Merry Christmas' and saying 'Happy Holidays' instead. Fox News will really save some money though by keeping its sound bytes and graphics from the War on Christmas for when the real war breaks out. Haven't heard about it? I heard about it from my GOP newsletter. If you make a contribution, you get a newsletter and each month it includes another classified government secret. Pretty cool if you ask me. But anyway, surely you've heard about the administration opening up oil drilling in Alaska. Haha, but everyone knows there is no oil in Alaska! But there is TONS of it at the North Pole. Our Dear Leader simply wants to get our troops some experience in drilling for oil while fighting in Arctic weather before combat operations begin. Personally I'm really looking forward to that war, some great photos should come out of it. 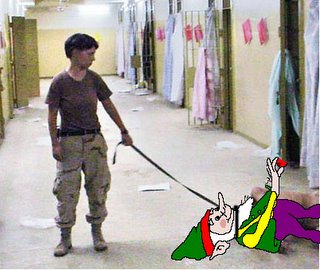