The Church of Patriotism

There’s been a lot of discussion this past week about Muslims getting upset about the cartoons published in the Danish newspapers. People have noted that it is absolutely horrible to threaten violence on other human beings simply because a non-living symbol that you hold very dear is insulted. And of course it is, but I don’t think that many of the people who criticize the Muslims realize that they are guilty of the very same sort of behavior themselves.
And no, I’m not talking about other theists, but the characteristics are very similar to a religion. I’m talking about patriotism. Patriotism of one’s country will allow a normally sane person to support their country even while it does harm to others. Patriotism invites an “us” vs “them” mentality that usually resorts to “us” being superior in at least a moral sense. Patriotism allows one to believe that the occupation of another’s country is for their own good. These things are all very similar to the beliefs that Christians would have.
I feel like I have a good understanding of the similarities between religion and patriotism because I used to be an extremely hard-core patriot. And I mean fucking hard-core. Even when I knew of US involvement in propping up dictators in foreign countries which subsequently massacred their people, my faith in the country didn’t waver. I felt that while the events were unfortunate, it was necessary for us to secure countries which we had strategic interests in because we were the country that was going to spread freedom over the globe (“Spread the Word”, so to speak). I found the national anthem to be amazing, and sometimes I would feel so moved my skin would tingle (“I could feel Jesus”). When I was young I looked forward to the day when I would be wealthy and could give more than my fair share of taxes to support the country that I love. And I bought the Desert Storm trading cards and supported our military like it was a sports team.
But back to the issue at hand. Outrage at the mocking of a religious symbol. Threatening or committing violence against those who do. In some way this is similar to those who wish to ban the burning of the American flag. It’s a revered item for many people and they think that protecting it is worth the infringement on freedom of expression and free speech. But this similarity isn’t that big of a deal, definitely not worth me making a post about, but it was when I saw this. A Republican representative from Missouri has introduced a bill which would authorize the use of force against someone who was about to desecrate the flag. And no, I’m not talking about the use of force by a police officer, but by anyone who suspects that someone is about to dishonor the flag. The person committing the violence could also not be charged with assault or theft as a result of them defending the flag. But don’t worry, the bill won’t allow the use of deadly force to stop the burning of the flag, but I bet you could argue it as an act of self-defense after the fight got underway. 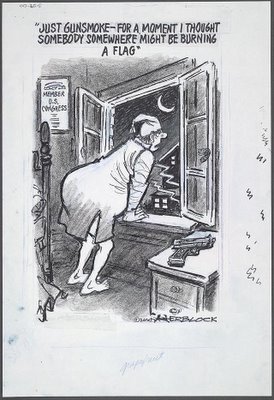 Anyone who would support this or even the banning of burning the American flag has no business criticizing Muslims for their anger over the cartoons of their beloved "prophet".
Posted by Delta at 9:44 PM

Wow, I hadn't seen that. That's really twisted. But, thanks for a good idea for another "God" for my God or Not site.

Excellent post! I mean it - truly outstanding. You are absolutely correct to link patriotism and religion. For many people, they are one in the same.

In reading your post, I can't help thinking about Bush's efforts to argue that it isn't torture if it is done by the U.S. In the name of patriotism and religion (because god is always on our side), treat other countries quite differently from how we expect them to treat us.

Based on the rationale our administration offered for invading Iraq, virtually every other country in the world would have the right to invade and disarm us.

Yes, we should keep in mind that since the beginnings of civilization, the religion has been the spiritual arm of the state -- or the state has been the political arm of the religion, depending on how you look at it. The leadership of both the priesthood and the state have usually been vested in a single person, who quite often wants to claim the status of a god. This way of setting up a society is ancient and proof of this is lying buried right now under the feet of our sons and daughters as they patrol the streets of Baghdad and Fallujah for us (if I may wax poetic).

So what's different now, in the USA? Well, our ruler doesn't claim to be god, he merely claims to speak to Him regularly and act on His behalf. And so far we have not allowed the state and the religion to become two aspects of the same social entity...very much.

Great post. It saddens me when atheists are patriotic, because it means that the reasoning skills they used to debunk religion was spared when it came to reverence for their own country. I find countries arbitrary and relative, only meaningful to humans in this time period. As far as I'm concerned, we're all a bunch of primates.

Great post. When I heard the Vatican claiming that religious symbols ought to be given the same protectiong as national ones I thought "Right on! For once I agree with them!" and started looking for my petrol can and matches. It is ridiculous and frightening that in the 21st century people would still be so primal as to get worked up about tribal symbols like this. As Konrad Lorenz said "I've found the link between civilised men and ape, it's us."