The Media-A Tool of Propaganda? 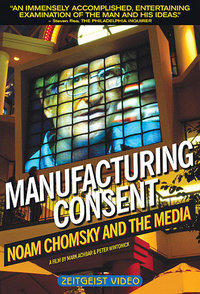 Today I watched a very thought-provoking documentary called Manufacturing Consent: Noam Chomsky and the Media, which is based on Chomsky's book . In the documentary the argument is put forth that the media serve and further the goals of the dominant groups in society, namely the wealthy and powerful. But this is not presented as some giant, secret conspiracy, but as naturally following due to the fact that the media is a business whose goal is to make a profit. This profit-incentive, as well as other factors, drive the media to form public ideas and present issues in such a manner as to serve the interests of the powerful. These biases are explained by what Chomsky and Edward Herman call the Propaganda Model. The theory explains that there are five "filters" which the news must pass through in order to "become news", and these filters select only information that is not at odds with the well-being of those in power.

These five filters are, courtesy of wikipedia,

So that's essentially the theory behind it, and in my opinion it is pretty straight-forward. Chomsky points to some examples in this documentary and there are also some great examples on another documentary called The Corporation . I think you'd be surprised as to what extent the media collaborates with its advertisers when their advertisers have something they don't want published. An example from The Corporation is rather poorly described here.

Anyhow, I highly recommend both of the documentaries. You might be able to rent them at your local video store (as I did with The Corporation) or view them at a university library (Manufacturing Consent). I think too often we, as atheists, think that we've seen through all the bullshit and aren't being misled anymore. I'm starting to think that perhaps that view is incorrect.
Posted by Delta at 11:44 PM

Thanks for the tips. I'm going to check out both documentaries and get Chomsky's book.

It's pretty interesting to consider that Chomsky's views came out of the Vietnam War era. Lot's of things have changed about the news environment, but his thesis holds up amazingly well. And imagine, Fox News (see "Flak" and "Anti-ideologies") didn't even exist yet when he wrote the book.

Bias is everywhere. Even what you and I write has a slant to it. The problem lies in figuring out who is at least giving you the facts with the least amount of distortion. I don't read the newspaper for those very reasons. I can't force myself to watch the local news either. The fodder that passes for news is sickening. In the meantime, people who don't know the difference eat it up. and sadly, I know many of these people. They don't listen.

I watched both documentaries recently. Both of them are very interesting and depressing at the same time. I was born and raised in USSR so I saw first hand what propaganda is and how it works in a totalitarian state. Here the model is more sophisticated and is not run by a group of people per se but is "organically" evolved as the result of the current political and economic system. It gives an appearance and hides behind the rhetoric of "free press". Of course, it is difficult to expect for press in general to be independent when we know that they do indeed depend on various forces (financial or otherwise).

Christians sometimes say that the greatest trick Satan ever pulled was to convince people that he does not exist. Well the greatest trick our system pulled is to convince majority that media is free and that it is very "left". I've heard it many times from my conservative acquaintances that CNN and other major news organizations are just a bunch of commies... If CNN is pro-communist than Bill O'Reilly must be a socialist...

With that said, people (viewers) play their role too. You can't just sell absolutely anything to public no matter how ignorant they are. There are certain things they will not watch/do/follow for various reasons. So public opinion also puts pressure on news organizations. They have to get viewers to view something in order to be able to sell them to corporate advertisers. So the picture is much more complicated than just "greedy corporate world is selling us crap". There are some objective and biological reasons why people prefer sex, violence, "reality" shows and other such programming while they lack interest in anything that requires thinking and analysis of actual reality.

I remember watching the news as a kid, and it seems to be alot more commercial nowadays(and i'm not that old). They say that blogs are a new source for news but all the blogs only publish what they hear from the news corporations themselves. It seems like television based news media are way more "hollywood" than before. There doesn't seem to be any real tv news anymore either, it all seems to be opinion. Even Headline News. The way the anchors and tv personalities convey the news. Making little jokes or using "power words". You've got to wonder if it's their own opinions they portray or that of the editors that they are just copying. At least there are still wire services like reuters and ap.

Lot's of things have changed about the news environment, but his thesis holds up amazingly well

Yeah, I've really noticed that. I've been reading his book and some of the things that he talked about in it are very similar to what has happened lately with the war in Iraq.

That's one of the parts of the DVD that I found interesting. I had never thought of the idea that by simply defining the media as being liberal, it not only makes the media respond by being more conservative but it also sets the bounds for discussion by identifying the "left" side of the debate to be the position of the media, when in reality the media is still right of center due to its responsibilities to corporate advertisers. In this respect the debate is essentially between the "far right" and the "slightly right" with no discussion of leftist ideas.

This is interesting, I made a post on this a while ago, and I still had right-wingers dismissing it despite all of the evidence and reports that support The Chomsk's model.

Yes, which is consistent with George Lakoff's idea of framing the issue. Basically, simply by framing the issues certain way and carefully choosing the language you use to talk about them you can potentially win the battle for public opinion.

"Don't Think of an Elephant: Know Your Values and Frame the Debate--The Essential Guide for Progressives" by George Lakoff

I just saw The Corporation, and it was good like you said it would be. I wish that sort of information would be part of high school economics courses in order to show students that it is a mistake to accept the corporate world blindly without awareness of its faults.