Pat Robertson Calls for the Murder of President Chavez 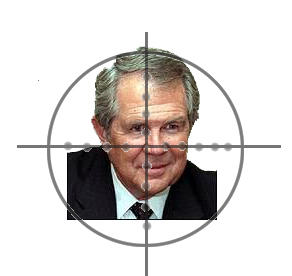 In a statement that has been all over the news today, Pat Robertson has called for the assassination of Venezuelan President Hugo Chavez. He accused Chavez of turning Venezuela into "a launching pad for Communist infiltration and Muslim extremism all over the continent". Communist infiltration? C'mon, the Cold War is over, and the changes that Chavez has made in the country have increased the education level and health of Venezuela's citizens. His changes are for the benefit of Venezuela and I can't really imagine him using resources to "infiltrate America", whatever that would mean. But what about a launching pad for muslim extremism? Hmm, I didn't know that Venezuela was such a haven for Muslim extremism considering the country is 96% Roman Catholic. But let's pretend that it isn't. Robertson is making the argument that supporting Muslim fundamentalists is cause to assassinate someone. But surely religious fundamentalists of all types are just as dangerous, including Christian fundamentalists like Pat Robertson.

It's also interesting to look at another justification for why he thinks we should assassinate President Chavez. He says that "we don't need another $200 billion war" and that "it's a whole lot cheaper than starting a war". Now I agree that if a single man is the problem, it is, of course, cheaper to kill the leader and not go to war with the country. But as a spokesperson and icon of Christianity, shouldn't Roberton's first reason for avoiding war be to save the lives of soldiers and innocents of both countries rather than simply worry about the financial cost? When discussing the atomic bombing of Japan, the common justification is that it would have been too much of a loss of life, on both sides, if the war was ended conventionally. However, I suppose the justification by Pat Roberts would have been that two bombs are simply cheaper.

This is simply another example of the danger of Christianity and the threat that it poses. Killing is bad, unless it's convenient. The Bible says "Thou Shall Not Kill", but I suppose I didn't get the memo from God saying that murder was okay if the target, as Robertson said, controls "a huge pool of oil, that could hurt us badly."
Posted by Delta at 1:05 PM

Why are we talking about this? Wouldn't it just be cheaper to assasinate Patty?

We've tried, but he can create an inpenetrible force field made entirely of bullshit. He's invincible, I tells ya.

I think he is a marketing genius. He just got himself free news coverage all over the world. I am sure people who like people like him will find his comments to be heroic. For them he is a true patriot who is not afraid to say it like it is...

Good post, good graphic. I dont know why Robertson has any followers at all, the nutjob.

The CBN will go with any story that will cause people to send more money in. He would burn bibles and abort fetuses if it brought more money and members to the 700 club. The most scary part in all this for me is that there are people who believe so strongly in God that anything that a Christian who is on national tv says means that it is the view espoused by the majority of christians. There are people out there who do not think for themselves but do and think exactly as Pat Robertson says. What if he had another "misinterpretation by the ap" and people "misinterpreted" him as saying kill anyone who doesn't believe in God because they are destroying America as we know it(This man ran for president!). I think anyone and everyone should start calling up their members of government and make a big stink about it. Maybe then he'll be condemned for the hate monger that he is. And i'm surprised that people on the other side of the spectrum as Pat Roberts have not struck back with serious action.

If I was to write an article titled "Proof That People Are Stupid," it would contain Robertson's TV ratings. That people spend their time with this crap is unbelievable. Of course, I suppose the fact that I don't watch the 700 Club makes me a "liberal elitist," doesn't it?

I like the picture of Pat a lot. Can I have your permission to use it on my blog?

You are most welcome to =)

The article is complete. Thanks for your picture, Mr Delta.